The other day, I harvested my experimental sweet potatoes. They’re experimental, because I didn’t have a clue how to grow them. Now that I’ve completed the experiment, I’m not sure that I know. It’s worth repeating this one in 2014 to find out.

Here are the basic steps that I followed, in case you want to grow your own:

1. February. Grew sweet potato slips, which means make a piece of the veggie grow roots. I bought organically-grown sweet potatoes, because the one bit of advice that I got was that the “regular” ones might not grow because of all the chemicals used on them to grow them and them keep them fresh in the grocery stores.

Think on that for a minute…

2. April. After a few months of refilling My Little Pony party cups (and replacing them when the paper broke down—good, quality cups there, people), roots and leaves grew! Out of the many slips I tried to grow, only three did.

3. Planted the slips in the garden, and watched the leaves die. Oh, the disappointment. I left the failed experimental slips in the ground, which turned out to be the right thing to do. Because…

6. August. By now, the dark green vines are trying to take over the too-small garden bed that I put them in. Guide the vines to empty areas of ground so they can root all over the place. (More roots, more sweet potatoes–that’s the theory.) 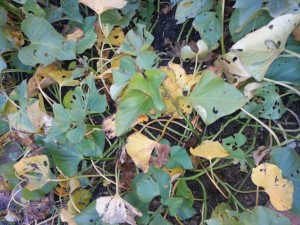 8. October. Is it cold yet? Turns out, the veggies like the hot summer but finish sweetening after a cold snap. Are the leaves still green? If so, wait some more.

9. November. The harvest time is tricky. The leaves should be yellowish. If they are all yellow or turning dark brown or black, then the sweet potatoes may be ruined in the ground. Ack! So, I picked a day and started digging with my spade. Was I too early? Too late? *shrug*

I felt a bit like an archeologist trying not to destroy the precious possibilities that may be just under the surface or really deep. If I ruined the veggies with the shovel…

Finding that first sweet potato made me feel like I’d found the first dinosaur bone or discovered the key to opening an ancient pyramid. When I found the huge one just under the surface, I was suddenly the person who found an alien baby. 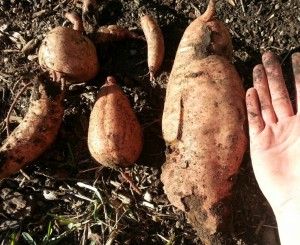 These organically-grown sweet potatoes grew in my garden. They weren’t pretty, but they were my veggies . Even though the ground critters took a few nibbles, I would love them forever.

One thing I would have done differently was that I wouldn’t have watered that garden at all that day. Muddy potatoes are harder to cure and clean.

10. Put the potatoes in the sun for a few hours to cure (let them dry out and set the skins). 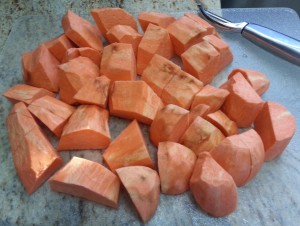 I stored them in a paper bag in my pantry until the day before Thanksgiving. I cleaned them up. I cut up the tiny ones to try for more slips (at least one is already sprouting leaves!). The giant alien baby weighed in at three pounds.

After I cut off all the splits and critter nibbles, I peeled the rest and chopped them into a lovely pile of orange sweet potatoes, which became a simple and delicious mashed casserole. 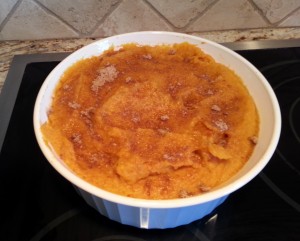 (I added brown sugar, real maple syrup, and a touch of cream cheese and mixed it until smooth. Don’t ask how much I used of everything, because I don’t know. I’m a dare devil in the kitchen that way.)

The new slips will determine if this experiment is repeatable. I’m starting them two months sooner than the last ones.

Did I mention that one is already growing?

Maybe these will have bigger root systems. Maybe I should have spread the roots around when I planted them.

In the time it takes to grow an alien baby ( :-D), we’ll find out if I can expand and improve on the sweet potatoes next year.

Was the 10-month growing period worth the wait? Absolutely! Am I crazy for starting the next batch a year early? *shrug* I suppose I’ll know for sure when I dig for the new sweet potatoes next November.

Do you have any garden stories? What was the hardest veggie or fruit you’ve ever tried to grow? Green or brown thumb?