Icemaggedon and It Isn’t Even Winter →

I Needed New Black Boots. My Washer Got a Gray One Instead.

A month or so ago, I noticed water pooling on the floor around my washer. I cleaned it up and ignored it like any normal too-busy person would do.

A couple of weeks later, I noticed water again. My husband (Honey-Do) took the back off and inspected all the parts. I ran a load and then another. Absolutely no water leaks anywhere.

Like any normal too-busy person, I ignored it some more.

Then the mother of all leaks happened. The water seeped onto the carpet in the next room! With lots of towels and a fan, I managed to get everything dry.

What the heck was leaking?! 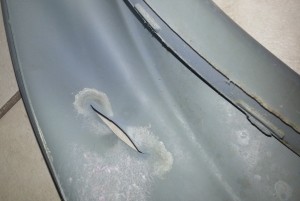 Would you believe it if I told you that duct tape didn’t stick to the two-inch hole?

This would be the end of the post if it did. LOL. Duct tape does NOT fix everything.

I’ve been washing laundry with towels around the base of the washer, just in case. I couldn’t NOT wash while I waited for the new part.

Also, that children’s song “There’s a Hole in the Bucket” got stuck in my head. No, I will not sing it for you. You can see the Sesame Street version here: http://www.youtube.com/watch?v=MAfCQ-t7xY0

With what shall I fix it? 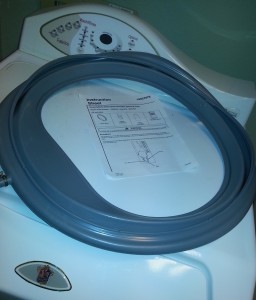 Yes, a boot. That rubber gasket-thingy is a boot.

That totally explains why it tries to steal socks!

For about $80, we bought a new boot for the washing machine. I think the washer was upset that the dryer got all the attention when we fixed the baffles. This appliance wanted its own post, too.

Armadillo asked the very appropriate question: “How can a washer wear a shoe?”

I showed her the broken boot (the one that just ate a big hole in my black boot budget). It looks nothing like a boot. She wasn’t impressed.

Honey-Do found a YouTube video that shows how to fix the washer. Soooo we did it ourselves. The dryer didn’t have as many parts to remove, but we watched the video. We figured that we know what we’re doing. We’re crazy like that.

It’s also super clean in all the nooks and crannies that can’t be reached for cleaning. Bleach is my new best friend.

After taking it all apart and putting it back together, we realized that the guy who made the video made it harder than it had to be. Oh, well. I won’t be quitting my day job to repair washing machines anytime soon.

For now, I’m grateful that we can change the boot. It’s waaay cheaper than giving the washer the boot and buying a new one. I’m also grateful that we have electricity during this crazy cold winter storm! 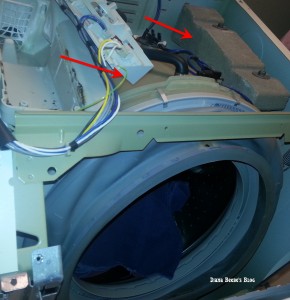 To weigh down the washer for balance, they used a cement block. I never would have guessed that.

The weirdest thing is the emergency door release wire. If the door won’t open and you have to open it, you can remove the soap dispenser and then pull the clear, green wire to pop open the door.

I’m not sure what could keep the door from opening. Any number of loads of unwashed laundry at my house would constitute an emergency. OK. I got nothing…

I’d love to hear your theories about why a washing machine has an emergency door release. Any ideas? What else is going on with you right now?

Icemaggedon and It Isn’t Even Winter →