← My House: Where Dishwashers Come to Die

How a Toothbrush-Stealing Dog Stole My Heart 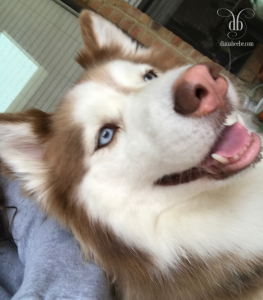 “No.” It’s such a simple word. Right? I’ve tried it a few times with my daughters. Sometimes it works. (LOL) Usually not when dogs are involved though.

The first time I said, “No,” I got overruled by my husband who asked questions instead of saying that simple, two-letter word. Our daughter called the animal shelter and asked all the right questions about the dog that would soon unleash what would become a horror movie resolved only by changing the old dog’s food. (Remember Demon Dog? And this story?)

New Year’s of last year I was standing in line at the no-kill animal shelter to introduce a shelter dog to our Catahoula Leopard Dog to see how they would get along. I got there right before a couple who brought in their husky for the same reason: To meet the dog I didn’t think I wanted.

So why was I going through the process?

I blame Bluebonnet. And Mockingbird. They had this idea that they’d get dogs their senior year in high school and then take the dogs with them to college after they moved out of the dorm for their second year.

Needless to say, Bluebonnet’s mother and I now have dogs that are clearly bonded to us. I digress…

So Bluebonnet called Mockingbird to come look at this little red husky at the shelter, because she was so adorable and quiet.

Mockingbird, Armadillo, and I had to go see this dog. Huskies aren’t quiet, so this dog had to be an anomaly.

She lay on the concrete floor with her front legs demurely crossed like a princess. She looked directly at us with her bright blue eyes and spoke. “Aroorooroo.” I will never forget that sound she made.

My first thought was, “Crap. I’m going to adopt this dog.”

Friends told me to get rid of her rather than work with her and train her. Don’t get me wrong. I know they meant well.

But here’s the thing about shelter dogs: They need time—sometimes lots of it. You have no idea how they lived before. Were they mistreated? Were they pampered, but something happened and they lost their families? Are they waiting for you to take them back or dreading the thought of that?

One thing I did know was that she was nervous and not very trusting. It was understandable since she’d been in the shelter twice during her short three years. Also, huskies have good memories. So we poured on the love.

But now, look at that face! She’s a sweetie. She’s always near one of us. She talks all the time. No such thing as a quiet husky. Just saying.

Lies! She’s really Armadillo’s, but she’s mine when my daughter is at school.

By the way, she still steals toothbrushes if she gets the chance.

What shelter pet stories do you have? Have you ever had a pet decide to claim a different human than the one intended?

← My House: Where Dishwashers Come to Die