Is That a Boy Brick or a Girl Brick?

Anyone who thinks Target was wrong to make the toy section free of gender labeling has never seen my girls play. When Mockingbird was younger, there weren’t “boy” and “girl” Legos anyway. She had different sets, including the medieval castle set had a fire-breathing dragon and knights! That’s what happens when a geek mom buys toys for her daughter. 😉 It was all about the dragon anyway. 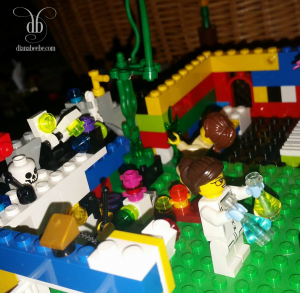 This is how my girls play with Legos. They build intricate houses, boats, science labs (like this one), zoos, police stations, evil villain hideouts. They give the girls jobs and activities that exist in the real world.

They love all the bricks. Well, some of the Lego “Friends” sets are too over the top and cute for them, but those bricks work great in whatever they feel like creating. Who needs instructions if you’re not building what’s on the box?

Kids don’t need labeling to know what they want to play with.

And girls should never feel as if they can’t play with something because it’s science-y or city-ish or super heroes or pirates or Star Wars–just because it’s in the “boy” section.

What other toys shouldn’t be defined or marketed as one gender or the other?