Persevering as a Writer

I get asked about my writing a lot. I mean, most people don’t know authors who are writing to get published, so I think I’m a bit of a curiosity. (Notice I didn’t say “weird”–most of you already know that I’m quirky.) I’ve been writing for a loooong time. Decades.

When I was in high school, I’d write stories in my notebooks anytime I had free time in a class. In my Typing class (yes, with electric typewriters and onion paper and correction tape), I wrote a scene that made me cry. That wasn’t embarrassing. *rolls eyes*

I always knew I wanted to write. It took me a long time to figure out how to learn the craft.

In graduate school, my creative writing professor taught us how to bleed our emotions onto the page. It was hard for me, and it’s something I’m still working on 25 years later.

What the heck? Twenty-five years?! “What’s taking you so long? Just publish the books already, even if they aren’t ready.”

I got the idea for my first novel in 1996. I plotted and wrote and plotted some more. I created the science fiction world. I threw all that away, and created the fantasy world. I plotted again. The story spoke to me. I loved the main character. It was a harsh world, and it gave me a place to explore dark societal things that most people don’t want to talk about. I bled on the page. Then, I got pregnant and suffered a miscarriage. As most women do, I blamed myself. The grief weighed on me, and my writing made me feel too vulnerable. I didn’t want to bleed on the page anymore. I put aside the manuscript. I couldn’t even look at it.

A few years later, I had had my second child. Family life became the continuous motion of being a wife, mom, volunteer, dog trainer, full-time technical writer. Then, the story surfaced in my thoughts again–ten or eleven years after I first had the idea. The plot percolated. The characters chatted with me. (Seriously, I know why “novel writing” was a condition allowed for being committed into insane asylums.) Finally, my late husband told me to start writing it again or we’d both go crazy. 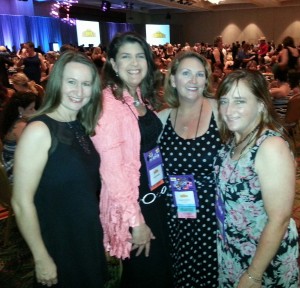 I wrote 50,000 words in one month–before I even knew what NaNoWriMo was. Most of those words were crap. I’d forgotten how to bleed on the page. I was writing safely (and superficially). I finished the book and revised it and edited it. A few beta readers gave me feedback and I revised it again.

Bleeding on the page is hard if you’re afraid of your own emotions. I’ll just put that out there.

I got smart and went to writers’ conferences where I learned I didn’t know much about anything in publishing a book. This book was by then around 15 years old. I took a blogging class. I took writing craft courses. I also bought and read a ton of craft books. I entered writing contests  and even won awards. I found critique partners and writing groups. I took more classes and found a mentor.

And I kept writing.

That book is still one of my favorites, but it needs revisions–again. I sent that first manuscript to a development editor. I’ve learned too much in the last 20+ years to allow it to see print.

I’ve written two other novels and am halfway through another. I have to remind myself that I’m working at MY pace according to my life’s priorities, and sometimes writing gets pushed back a little.

I’m here to say that sometimes sleeping is more important–as are taking care of my kids as a widowed, single mom; replacing the roof, the dishwasher, the garage door, and two computers; and rediscovering who I am.

While other authors are cranking out books, stories, and novellas every quarter, I’m reminding myself that my family and my house need attention and that it’s okay that I’m writing at a different and slower pace. Words are words. I’m making progress.

Do you want to read other stories of how writers have persevered? Go see the list of posts here. Also, you can look for #writerspersevere in other social media platforms.