← 5 Things I Love About My Dog

4 Ways My Dog Trained Me

In my last post, I described some of my memories about our beloved dog, Tex. I saved all the bits about training for this post. I’m not sure who was training whom.

If you know anything about Portuguese Water Dogs, then you know they are a handful. We started training him as soon as we got him home. He was already crate trained (mostly), which was a huge help with the house training. The fun training was sit, down, shake (he even learned “white paw” and “black paw”), and “say hi.”

1. I took him to an obedience class that was taught by a well-respected trainer. Tex hated the class. Hated it. Maybe I hated it, and he could tell. He let me know that he wasn’t happy. We both learned a lot, but I learned that he liked positive reinforcement—and treats—way more than snappy commands and a choke collar.

2. So we started taking agility classes after a co-worker told me about it. We put our puppies in the same class. What a crazy puppy class we had. They were called the Wild Bunch. There wasn’t a session that one or more of the pups got the zoomies alone or with each other around the course.

Tex loved agility. Loved it. I know it was all him, because I had to get over a ton of nerves to perform in front of other people. Even when I finally gained some confidence, I was never fast enough for him.

One class, our trainer, Elizabeth (who was internationally known and fabulous) gave us a short sequence to run: jump, chute, and dogwalk. Easy.

I took half a second too long at the start. Tex ran the sequence without me.

The look he gave me from the top of the dog walk said, “What’s taking you so long?” My classmates thought it was hilarious. I told Elizabeth that if I could just get him to memorize a course map I wouldn’t have to run with him at all. Sadly, I just wasn’t fast enough in the agility ring.

In one competition run, he barked at me for being nervous and slow. He could see two obstacles, but I hadn’t told him which one to take. You see, he was in the middle of the weave poles, talking to me the entire way. I couldn’t tell him until he was almost out, because he would miss the last pole or two to get to the next obstacle. He got so mad, even though I knew he would bail on the weaves. He jumped and growled at me. I think it freaked the referee out to see a dog reprimand his owner. Yeah, I was mortified. I can’t even remember if we finished that run.

He did get a second place and a Q (qualifying run) in one Jump and tunnel competition. He was beautiful when he ran. That was a great run for me, too. You know that feeling when you do something really well, and it feels incredible? Yeah, that.

3. I taught him to ring a big jingle bell on the back door so he wouldn’t scratch the wood. He learned in 30 minutes that he could go into the backyard anytime he rang the bell. Awesome.

Then he started ringing the bell to make me get off the couch to let him out. He would circle around the other way and steal my seat next my husband. Tex would give me a look that said, “My daddy.” LOL. 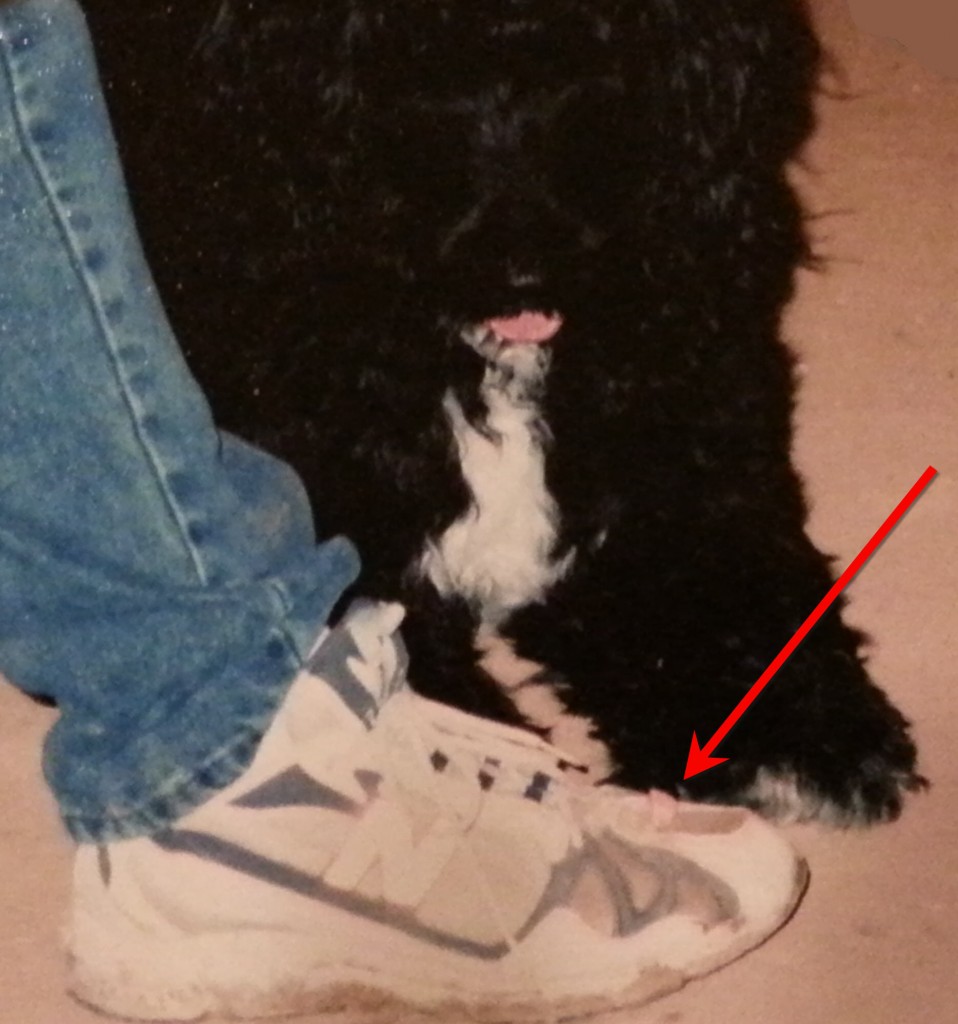 4. “Wait” and “Take it” were commands we used to make him slow down when he ate. We taught him “Wait” to help little Mockingbird teach him that she was higher in the family pack than he was—really important when the puppy grows larger than the kid in a few short years. She would hold him in “Wait” for as long as she wanted and then release him with “Take it.”

This trick also helped me control him at agility training. He’d forget all about zoomies if a treat was offered. He could wait for several minutes.

One time, we were all at my parents’ house for Christmas. My brother was fixing Christmas lights and a small bulb was on the floor. Tex looked at it like it might be food. Dennis said, “Take it,” thinking there was no way Tex would eat it. Wrong. He ate it as if it was a treat just for him. It didn’t hurt him. I’m sure it exited his system at some point.

The biggest drawback for the “Wait” command was the drool. Tex would have been a favorite Pavlov dog—measurable drool while waiting for the “Take it” release. The drool. Blech.

BONUS. Whenever Tex searched the yard and pointed at things we couldn’t see, we knew he smelled rats. One time, he ripped apart a bush to get at a nest, which he destroyed. He knew the rats didn’t belong around our home, and he was protecting us. No training on our part required.

Do you have any dog (or other pet) training stories?

← 5 Things I Love About My Dog