← Finally, My Own Place

Not a Sweet Failure After All →

When Time Traveling Can Predict the Future 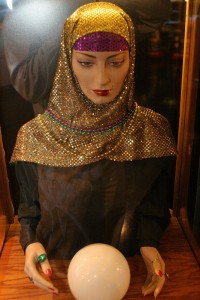 I have a wacky sense about time and time traveling.

When I saw this post by Piper Bayard, I almost fell out of my chair laughing. Fridays, the end is near, and, yes, we always deserve it.

Go to her blog and watch the video about the Iranian scientist who made a time machine (sort of).

You can also go to the Wired article here, but you would be missing out on Piper’s blog. It is worth it.

This isn’t a DeLorian that needs 88 mph to transport passengers to another time. Nope. No traveling required. It’s a computer thingy-thing (that they don’t want to produce for fear that the Chinese will steal the technology and make millions of pirated copies) that can predict the future up to eight years for the user.

How is that any different than these ten predictions? Take a look at these three in particular:

10. An ancient Chinese king in the Shang Dynasty read oracle bones that said the kingdom would suffer. In further searching, I couldn’t find another story about “bringing calamities,” but I did find this explanation of oracle bones during this king’s reign that makes this ancient time machine believable. The bones would say if events would be auspicious or not. He recorded his results on a stone, and now us future people believe he really lived.

This makes me think of Professor Trelawney in Harry Potter. Sure, she had the prophecies when they mattered, but they were still interpreted as the hearers wanted to hear them.

When “the sight” failed her, she made up the future. Her favorite thing to predict: DOOM. Did terrible things befall the characters. Yep. Was she right just because she time traveled in her crystal ball and “saw” the future? Nope.

8. Croesus, the king of Lydia in 560 A.D., was so wealthy that he left treasures in Delphi. The Oracle told him that the war with the Persians would end in disaster. Well, it couldn’t mean disaster for him. *roll eyes*

The Persians destroyed him. What did Croesus get from his Oracle Time Machine? Nothing but what he wanted to believe (and he was wrong). And, archeologists (real-life time travelers) got lots of treasure to look at.

1. Babe Ruth called his shot. Did this great baseball player need someone to look into the future to see if he would make that great, legendary homerun? Maybe a time traveler went into the past to show Babe his future?  Nope, he was a phenomenal baseball player who played to win.

What do you think of this new time travel invention that requires no traveling? Would you want to know what your future is? If you had the chance to look at your future, would you do it? Would you try to change the future or would your actions always lead to that predicted future (oh, that’s another post, isn’t it)?

← Finally, My Own Place

Not a Sweet Failure After All →